SwipeGuide has been selected among one of the 30 most promising women-led startups in 2022. The Female Founder Challenge is one of VivaTech’s biggest awards ceremonies, where the most inspirational women-led tech company will be crowned during the VivaTech event in Paris on June 15-18th, 2022.

For the fourth year in a row, VivaTech, in partnership with 50inTech, launches the Female Founder Challenge sponsored by Salesforce and Société Générale with Expert Partner Avolta Partners with two main objectives: facilitate VC-startup meetings to accelerate the financing of women-led startups all around the world and urge VC funds to commit to more gender equality at all levels

The current buzzword in Tech right now is gender diversity, but is it all talk? In 2021, we hit a five-year low of less than 2% of venture capital funding going to all-women founding teams in US. With only 14% of the new global unicorns were founded or co-founded by women and 1/26 women-led unicorns in France.

Even though these trending topics have not yet fully translated to positive action, inequalities are even more pronounced when the founders are from diverse backgrounds. Despite this, the number of women entrepreneurs continues to grow. It is therefore up to the VC industry to act and the tech ecosystem to promote underrepresented female founders.

"Given the figures mentioned above concerning gender gap in the tech sector, it is more than necessary to move the lines and to value female entrepreneurship. This is why we are renewing our commitment to 50inTech through this challenge, which has already supported many talented women by facilitating their access to funding." explains Julie Ranty, General Manager of Viva Technology.

From an applicant group of over 69 countries with various sectors from Software development to Foodtech, 30 out of 504 applicants were selected. Among them, 5 finalists will be invited to come and pitch their project to a jury of investors at VivaTech. 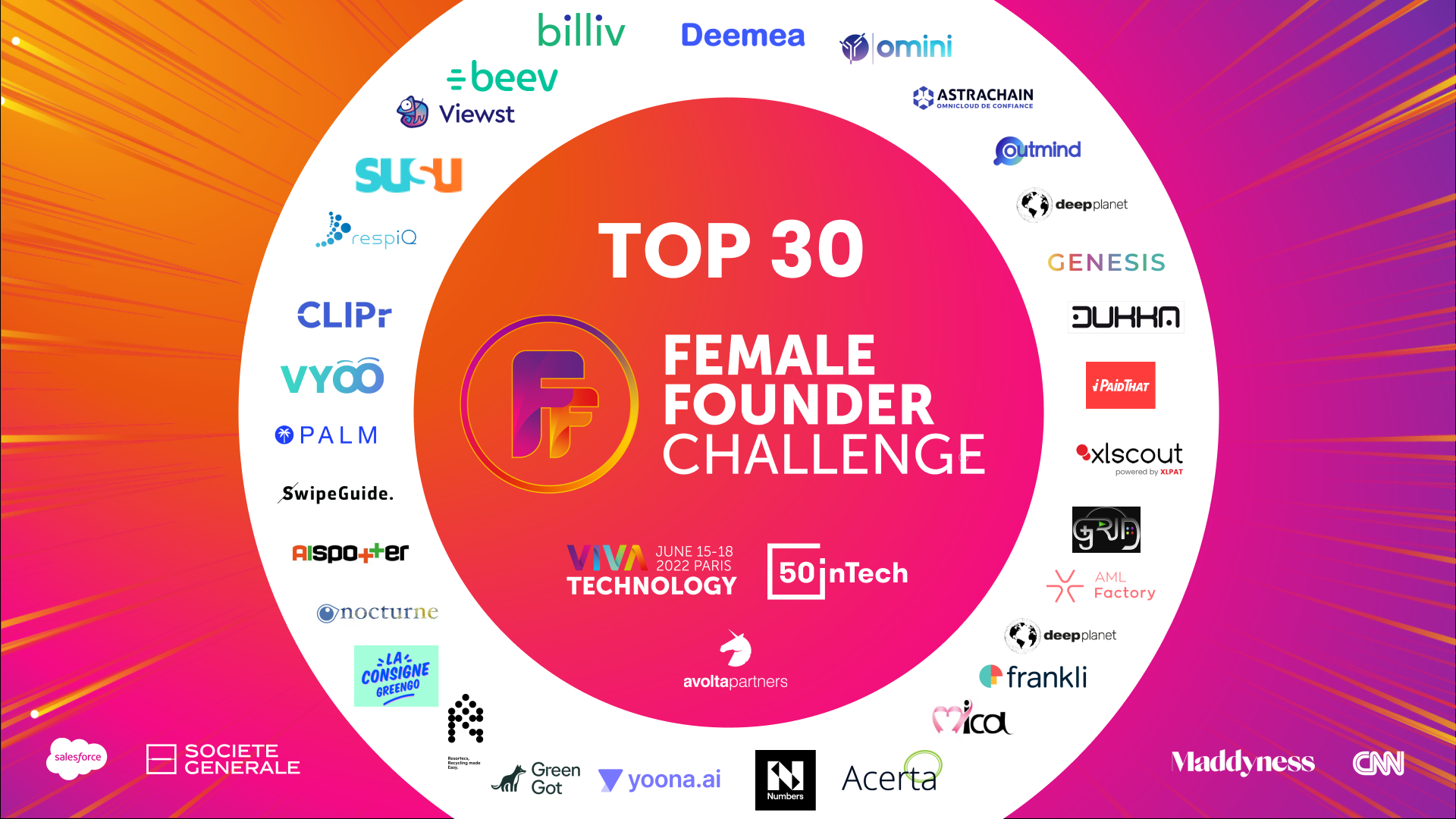 “Among all the applications received we were impressed by the level of maturity of the companies, despite their recent creation, as well as by the geographical diversity. The health crisis has probably favored the meteoric growth of Healthtech/Ed Tech/Fintech startups... which is rather consistent with the needs that have been created.” explains Eve Baldini, COO Avolta Partners

Every applicant to the challenge is invited to an exclusive Bootcamp centered around giving concrete fundraising best practices from expert investors and founders. On the agenda, Founder of Plan A Lubomila Jordanova who just raised $10 million in its series A funding round sharing her key learnings on how to conduct a roadshow. How to build a pitch deck with Nelly Lavielle, Partner at BGV and how to prepare for fundraising with Arthur Porré, Founding Partner at Avolta Partners.

“We know that unconscious biases affect women entrepreneurs' fundraising. With this Bootcamp, we want to give them all the codes by industry leaders to be 100% ready but also examples of women entrepreneurs who have managed to overcome the bias to succeed” - Caroline Ramade, co-founder of 50inTech.

The top 5 finalists will be taking the stage live to pitch at VivaTech 22 in Paris, France. More information can be found here.

About Viva technology
VivaTech is the biggest startup and tech event in Europe and is recognized worldwide as a powerful catalyst for business transformation, startup growth and innovation for the common good. Since 2016 VivaTech has brought together in Paris the world’s top business leaders, startups, investors, researchers and thinkers for a unique experience combining inspiration, networking and a showcase for innovation. Starting with the 2021 edition VivaTech is now enriched with a digital platform that connects a global community of innovators. The sixth edition of VivaTech is taking place 15-18 June 2022. More information available at https://vivatechnology.com/media and @VivaTech.
Press contacts: Léa Roos : lroos@vivatechnology.com & Pierre-Henri Paty : vivatech@publicisconsultants.com - +33 6 49 13 44 79


About 50inTech
50inTech accelerates the careers of women in Tech. Our innovative job board matches the most talented women in Tech with the most inclusive companies. We've created the 50inTech Gender Score to help European Tech companies measure their level of gender-inclusion, so they can be transparent and progress faster. We also provide free virtual bootcamps, networking and mentoring to our community of 15 000 women in Europe so they can find their next career move and thrive. 50% representation of women in Tech by 2050? We can make it together, join us on www.50inTech.com
Press contact 50inTech : Tara Johnson : tara@50intech.com - +33 07 84 20 89 15

Annika makes it her business to share how collaborative digital work instructions help top manufacturing companies like Coca Cola, ABB, and Heineken reduce errors and downtime - all while reinvesting the expert knowledge of their frontline teams.

Next stop: Chicago. We're Expanding our US Presence with the "Orange on the Lake" Program.

Why We Opened Our US Office in… Minneapolis.

"You're opening an office in Minneapolis! But WHY?" Well, here's why.